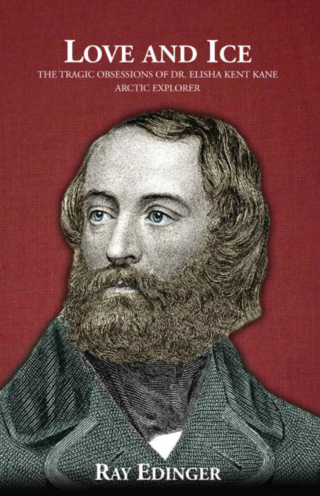 A page-turning historical narrative of Arctic exploration . . . that kept me enthralled from the very first page.
--Barnes and Noble.com Reviewer

Love and Ice reads like a great adventure. It combines well-researched biography with perilous Arctic voyages and a tender, tragic love story. This tender but ultimately tragic romance provides a poignant contrast to Kane's world-wide adventures and celebrity and may bring a tear to the romantic's eye. A great read!
--Amazon.com Reviewer

A crater on the moon, a redwood tree in California, a US Navy destroyer and a naval survey ship—these are some of the notable tributes named for Dr. Elisha Kent Kane, perhaps the greatest American hero of the 1850s. Indeed, his presentation sword sold at auction in September 2003 for $68,200.

Love and Ice is the story of this famed explorer who was among the first Americans to search for the missing British Franklin expedition of 1845. And while he combed the Arctic for Franklin, Dr. Kane not only discovered the sixty-mile-wide Humboldt Glacier—the North Atlantic Ocean’s greatest source of icebergs—but he also mapped the little-known Smith Sound that Robert E. Peary followed fifty years later on his quest for the North Pole.

Yet what ultimately captures the reader’s sentiments is the love affair that flamed between Elisha Kent Kane and the beautiful Maggie Fox—spirit-rapper, medium, and co-founder of Modern Spiritualism. Their affaire d’amour was star-crossed from the start, however.

With Elisha’s name a household word, his already having touched on five continents, twice crossed the equator and sailed the seven seas, Elisha Kent Kane should have been a man of independence. But his parents loomed significantly in the thirty-two-year-old’s life, and fearing that they would oppose his relationship with Maggie, he worked hard to hide it. Nonetheless, the romance flourished. For six months the two lovers secretly exchanged gifts and letters and enjoyed each other’s company. When the US Navy awarded Elisha command of another expedition to the Arctic, he promised to marry Maggie upon his return.

The mission departed to great fanfare, yet primarily because of Elisha’s recklessness his expedition was a disaster. Three men out of a crew of twenty died. With no hope of extricating their vessel from the ice, the survivors escaped in their battered whaleboats to a Danish settlement five hundred miles to the south. After an absence of more than two years, they arrived in New York where crowds greeted them as heroes and Dr. Kane wrote a best-selling book about the adventure.

Yet still afraid of his mother’s wrath, Elisha reneged on his engagement to Maggie. Passion prevailed, however, and before long he renewed his promise and received Maggie’s forgiveness. They married in a civil wedding just days before Elisha sailed for England to plan another expedition to search for Franklin. Always a sickly man, illness crippled Elisha while away and he died before returning home. The powerful Kane family—domineered by Elisha’s father, the Honorable John K. Kane, a prominent lawyer, federal judge, politician and friend of Andrew Jackson—denied Maggie her legacy. Despite a lawsuit and publishing Elisha’s love letters, Maggie received only a small portion of her money and died in poverty.

But Elisha’s legacy lived on through his books. His second book sold 65,000 copies in its first year alone. Never before had the public read such an enchanting account of a voyage. Never before had they read of such grueling trials and frustrations, frostbite, suffering and death. Or experienced the romantic images of floating mountains of ice, ship-crushing ice, tempest-tossed ice, and the gloom of shipboard life in twenty-four hour darkness. Not only did the reading public savor Elisha’s account of his voyage, but so did future American and British explorers to the Arctic.