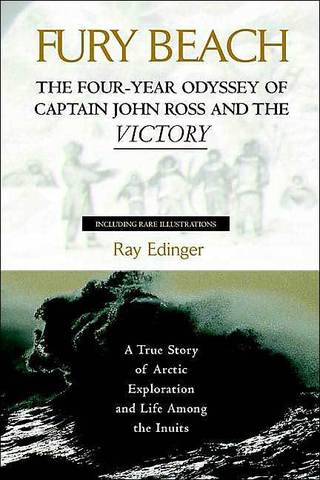 PRAISE FOR Fury Beach: The Four-Year Odyssey of Captain John Ross and the Victory

A feat of polar exploration and survival to rank with Shackleton’s storied Endurance expedition of 1914-16. . . . Captain Ross emerges as an irresistibly likeable as well as gallant figure in these pages of a book that is definitely a labor of love.

Brisk recounting of the harrowing sojourn that led naval commander Ross to conclude that searching for the Northwest Passage was an utter waste of time.
--Kirkus Reviews

Edinger has rediscovered and skillfully retold a forgotten but absorbing epic of early Arctic exploration. . . . An engaging narrative for most any reader, Edinger’s account will be especially gripping for maritime or Arctic exploration fans.
--Publishers Weekly

Edinger’s enthusiasm and knowledge shine through the pages and make for reading that is lively as well as accurate. This book is, in fact, one of those that can be opened anywhere and will captivate the reader’s interest.
--Kliatt

Edinger's very readable account . . . is an important book which deserves a wide readership, and with the bicentenary of Ross's voyages approaching, it will help reinstate him as a British and Canadian hero.
--The Northern Mariner/Le marin du nord

Simply enthralling. In particular is the interactions with the Inuit and the rather fascinating and surprisingly touching interactions of these two very different peoples. A good read for those with a love for Arctic history and tales of human endurance.
--Sean MacUisdin, goodreads.com


Edinger makes every effort to give a balanced perspective, and recounts with frankness both the friendship and the prejudice with which the officers and crew of the Victory received their Inuit neighbors. It remains a compelling story, richly deserving of retelling, and one can only hope that Edinger’s version is as widely read as Ross’s original narrative was more than a century and a half ago.
--Arctic Book Review

Fury Beach is the gripping tale of Captain John Ross who sailed from England in 1829 to search for the Northwest Passage in the Canadian Arctic archipelago. Ross’s expedition hinged on the tender John to follow along with provisions, but the John experienced a mutiny that foiled his plans. Sailing without the John, Ross was compelled to find the 1825 wreck of HMS Fury to replenish his short supplies. Ross located the Fury’s abandoned stores, but only after nearly losing his own ship Victory to the crushing ice.

Ross and the Victory wintered in the Arctic as planned, but when the crew attempted to sail onward the next year, they discovered that the ice had trapped their ship. The planned fifteen-month voyage ultimately lasted over four years. During their entrapment the crew developed a friendship with the local Inuit. The natives provided mapping expertise, fishing, hunting, and general knowledge on survival in the Arctic. With the Inuit’s help the crew carried out extensive exploration, which culminated in the discovery of the north magnetic pole. Yet perhaps more important was the companionship that developed between the two cultures.

After three winters in the trapped ship, food and fuel were nearly exhausted, clothes were in tatters, and the health of the crew collapsed as scurvy and horrific frostbites wreaked deadly havoc. Three shipmates died. With no hope for the ship’s extrication, the crew abandoned her and the men attempted to row and sail home in whaleboats. But bad weather and heavy ice turned them back. On their second attempt a year later, a whaling ship rescued the survivors.

Welcomed home as a hero, William IV knighted Captain Ross, but Ross faced severe criticism from his longtime enemy, Sir John Barrow, Second Secretary of the Admiralty. Among other things, Barrow censured Ross—a captain in the Royal Navy—for taking part in the privately financed Victory expedition. But the popular Ross ultimately won vindication for his polar achievements and another link toward the discovery of the Northwest Passage was completed.

A true story of romance, adventure, and tragedy in the nineteenth century.